This was the coolest thing we did all day.
We were given the supplies – well, most of them – to build what you see here. Different groups were set up with different drawbacks in supplies such as not enough popsicle sticks, short paper, not enough cups, etc. We were a group of 7 (I took the picture. This should be fun to do in the classroom. I’m hoping I will be given the supplies to do this with my classes.
Step 1: The leader (observer) was given a chance to see the final design for 1 minute.
Step 2: The leader returned to the group to get the team going on track to create what s/he saw. Groups were given 10 minutes. It was important to delegate, direct and guide the group as the goal could only be envisioned by the leader initially. The leader has to get the final product in the mind of the group members in some way.
Step 3: All groups debriefed to the whole group about challenges.
Step 4: Leaders were permitted 30 seconds of further observation.
Step 5: Leaders returned to the group to drive the group closer to completion.
Step 6: Groups were allowed 10 minutes to complete the construction.
Step 7: Groups debriefed again, and talked about how they managed to get the project to completion.
Step 8: We then were allowed to see the model leaders took a look at. 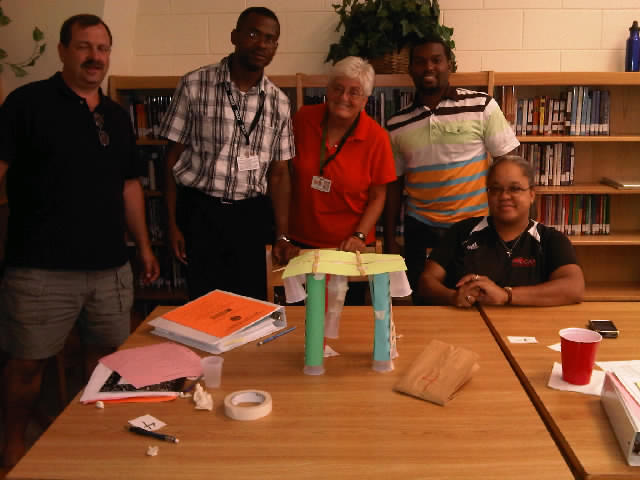 8 Reasons Why Gum Has No Place in the Classroom

« Need Supplies? Check it!
Cell Phones in the Classroom? Destructo!!!! NOT! »